A short introduction to the research project BIMAAR:

This interdisciplinary project studies transnational autobiographies by black authors in the Americas during the Age of Revolutions and its aftermath (1760-1860). During the period, large parts of the Americas gained their independence from the European colonial powers. Simultaneously, black-authored narrative texts emerged in the region. Among them, autobiographies played a key role in asserting black identities and agency. 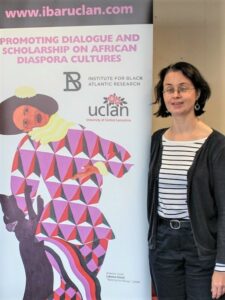 The research is the first of its kind to study these text types from across the Americas from 1760-1860. It focuses on different forms of mobility black people exercised. It examines four types of black life narratives of the period in which spatial, social, and cultural mobilities played a role. They include slave narratives, Indian captivity narratives, memoirs of Christian missionaries, and memoirs-as-travelogues. As anglophone North American or Caribbean authors especially produced these text types, most texts studied here hail from these regions.

See also the slides of an introductory lecture about the project: INTRO SLIDES